The Club Car Championship at The Landings Club 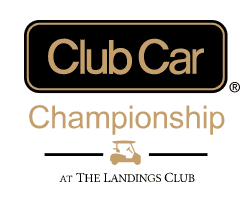 Savannah has a rich history of golf, with golf and athletic clubs appearing as early as the 1800s. Tournament golf has visited Savannah since at least the 20’s and 30’s, including the 1930 Savannah Open where Bobby Jones lost by one stroke to Horton Smith. Later that year Jones went on to win the Grand Slam, still the first and only player to complete the task in a single season.

The Liberty Mutual Legends of Golf, contested at The Club at Savannah Harbor, had a successful 11-year run from 2003-2013 and was a popular stop on the PGA TOUR Champions schedule. Field regulars included Jack Nicklaus, Arnold Palmer, Gary Player, Lee Trevino, and Savannah native Gene Sauers.

Public Parking is available at the UGA Skidaway Institute of Oceanography – 10 Ocean Science Circle. Parking is $5 and is donated directly to CASA Savannah. Complimentary shuttles run every 15 minutes and will drop you off at the Main Entrance. The final shuttle is 30 minutes following play.